"Around 7:40pm on the 9th of August 1981 my son Brian and I had just finished eating when we heard the loud noise of an engine is the distance. We both looked around but could not see anything but the noise was getting closer. Brian said Dad what's that. It appeared to be a plane doing stunts. It was side to side up and down and had very a bright light on the front of it and every so often the light would hit the ground where we were. Finally it turned south- east and dropped behind a ridge in the distance. I didn't think much else of it. When we looked the next morning it looked like Chichester ridge from where we were. I learnt a day later when we got home that a plane had crashed up there and when they said around Carey's peak I just thought I could of been wrong about what I seen. Maybe the ridge was further back. I reported what I had seen to Dungog police and they told me they would look in to it. We were both camped about 1.2km west of Cherry tree road up on a ridge. From the 7th to the 11th of that month." 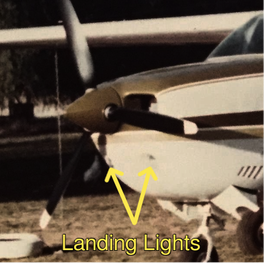 Landing lights are nearly always set up with one light pointing directly out in front of the plane with the second one pointed downwards a little to illuminate the ground immediately in front of the plane when taxiing, and also to enable the pilot to still see the runway ahead with a high nose attitude when the plane is flared just before touch down
Hence, the reason why the statements, “One minute the lights are on us then they point away again” and, “every so often the light would hit the ground where we were” initially I thought was nonsense, but on further reflection I came to realise that this did not mean the nose of the aircraft was positioned in a dive, but was simply the plane was further out in the valley besides these ridges (most likely a little higher) and the glow of the light would flash across the witness positions as the plane was being thrown around twisting and turning in the very turbulent air that would have been present in that valley... due to the strong wind flowing over the ridge. Not only that, the fact that the light shone on the upwind ridges whilst the plane was traversing down that valley, showed that Mike was controlling the plane by offsetting the drift by pointing the nose that way (crabbing along).

Report #1 said it, “It headed south to Ben near Cherry Tree Road” and the ‘Ben’ mentioned here is a peak known as “Big Ben Mountain”.

From the observation point of F&S #2, they could see down into the Monkerai Valley and strangely they said it turned south-east and dropped behind a ridge in the distance (inferring that it had descended?), yet then said that in the daylight next morning, it looked like the Chichester Ridge.  Chichester Ridge is much further west and cannot be seen from that position which surely indicates they had a problem over knowing the name of the ridge?

You’ll note I have drawn this track going past Big Ben Mountain on the eastern side as this will become apparent as we move on....