I contacted Bryan Cox (who was also a Corsair pilot in No.16 Squadron at the time of this most unfortunate affair) regarding their probable climbing speed, and this was his reply: “Our normal cruise/climb speed whilst in formation was 170 kts (195 mph) probably only giving about 1000 fpm. But depending on terrain circumstances they could have  climbed a small formation of four aircraft steeper at about 130 kts (150 mph) giving a good 2000 fpm - so there is much conjecture!”  Upon entering the cloud at about 3000, Sheppard stated, “whereupon the leader gave us a course of 120° to steer. After no more than one minute, my motor started running roughly” = 10.54 By the time Sheppard ascertained that he genuinely had a problem, called Reynolds for permission to return to Westport and got a reply, would have been about another half minute before turning = 10.54 + 30sec’s / ≤ 6000’.

The Denniston area plateau is at 2200’ and as the cloud base they reported to have climbed into was 3000’, then they must have been at least 2700’ in the area of Denniston. They entered cloud at the reported 3000’ and as Sheppard stated, “at about 5000” his motor ran roughly (“no more than a minute”) means they were climbing at the cruise climb of 150 mph / 2000 ft per min given by Bryan Cox. Climbing towards the ranges, I would have expected Reynolds to do this anyway.... climb on the steeper angle to get obstacle clearance. Incidently, the maximum rate of climb for that model Corsair is reported at 2890 fpm. The speeds we are using are cruise climb rates. As Google Earth plots courses in True and not Magnetic, we need to convert the Magnetic headings to True. A course of 120° Magnetic converts to 137° 45’ True, as in 1944 the variation was 17° 45’ according to “The New Zealand Air Pilot” 1946 landing charts that I have in my possession. It states that it was 17° 50’E in 1945 with an annual increase (decrease in this case) of  5’. You would think that it would be a simple calculation to work out what distance they travelled after entering cloud as using both speeds given by Bryan Cox (150mph/2000’min & 195mph/1000’min) and we all know that 150mph = 2.5 miles/min & 195mph = 3.25 miles, but wait on a minute you might say.... that is not the distance over the ground - it’s the distance travelled on it’s trajectory? Making an allowance for this, calculates out to not that much distance 150mph/2000’min = 2.4 miles and the 195mph/1000’min is not even worth mentioning as there is nothing in it! The steeper the climb rate, the more it effects the ground speed.

Again, Sheppard said they entered cloud at 3000’ and it was no more than a minute when his motor ran rough, and believed it to be about 5000’ (Reeve’s guessed at 7000”) so this would put their climb rate somewhere close to the expected rate of 2000’/min as they were flying into rising terrain - putting their position somewhere around the 2.4 miles inland from the ranges east of Denniston. This would place Sheppard at about 14 to 15 miles from Westport, 5 to 6 minutes flying time away after he had completed the turn to port. Sheppard reported that he heard the radio calls of Reynolds and Reeve attempting to contact Barstow, which would place the timing of the formation turning back within one to two minutes after he turned back which verifies Reeve’s statement of “shortly after,” as it meant he had to have been still airborne at that time.

You’ll note in this part of Sheppard’s sworn “Summary of Evidence,” signed by him the same day as the first Court of Inquiry 16-11-1944,“accordingly turned to port (left) and set the course that had been given to me” (300°M according to Reeves).“After about a minute in a gradual dive I came into the clear above a gorge.” 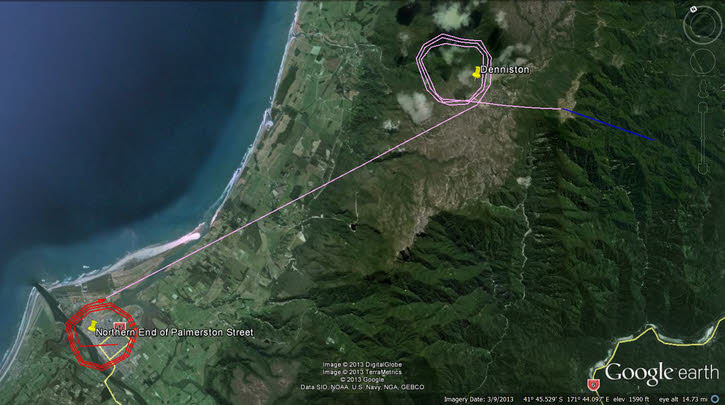 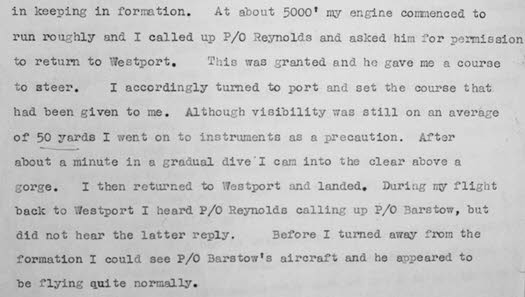