Keep in mind that even if he did pull it out of the rapid descent, he’s still flying blind (be it in cloud or the dark night) and is still terror struck - expecting to die any second, so he wouldn’t be in his right mind and controlling the aircraft correctly... if at all... He would have simply given up all hope!

Why do I suggest these two scenarios, you might ask.... Simple... there was a FIRE 10 nm further on, just 1 nm to the right of the track. VH-ESV checked this fire out, but after circling it, decided it wasn't an aircraft burning because the fire was not intense enough. The only problem here was ESV was over the fire site about 45 minutes later. An aircraft fire is only very intense for about 10 minutes until all the fuel is burnt and then all that would be left burning is anything left in the surrounding area such as the bush.

I wonder if there was ever any feet put on the ground in this area to actually check it out?

There wouldn't be much to look for as all that would likely be left is a pile of black sooty melted aluminum and steel parts such as a crankshaft and cylinders.

A very experienced Aircraft Accident Investigator once told me that if an aluminum aeroplane happens to end up crashed with it’s tail up in the air, the fuselage acts like a chimney and the fire becomes even more intense, destroying virtually absolutely everything! 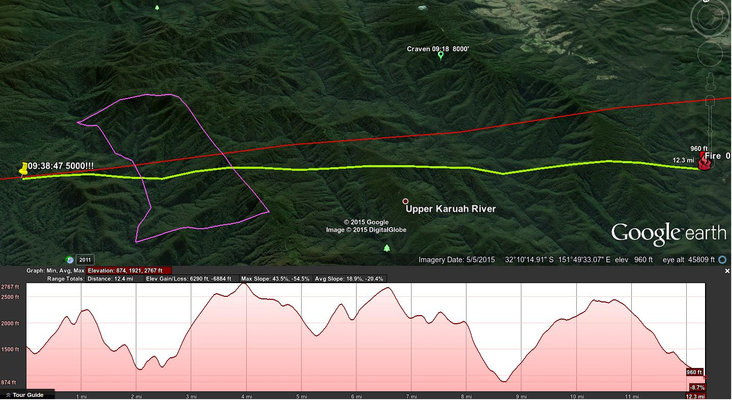 Summing up... The first thing before any search of what I’d call the “Primary Search Area” is commenced, would be to find out where exactly this fire was. All I know is that it was 012°M, 38 nm from West Maitland (NDB) but there is nothing like having the exact co-ordinates. This position is very close to Cheery Tree Road so it should not be that hard to get to. There are buildings not that far away, but that doesn't mean to say that it eliminates the possibility of a crash site being nearby. It's happened before where wrecks have been right under people's noses and they have never known until one day when they happen to trip over it!

It would need to been gone over with a metal detector due to vegetation grown in the area now.

This project has been one of the most difficult I have ever done. I have worked on it off and on over several years now, and have spent in the region of thousands of hours... not hundreds! It has been difficult weeding out fact from fiction as so much incorrect information has been published on it. Working from New Zealand has been exceptionally difficult as I've had to rely on you lot over there (Australian readers) for all kinds of info. Some of it I have eventually got, but a great deal has never eventuated. However, I feel we have got there in the end, and I'm very grateful for the help I have received from many of you.

Many times I have written up to around twenty pages at a rate of about a page a day (due to time spent checking on the facts) and then discovered that my facts were wrong as one thing did not line up... delete, and start again!!! So consequently this article has come at a huge cost of lost time and revenue, so I really hope you enjoy.

I hope that all this will give you a huge boost and MDX will be shortly found – leaving you with, I believe, a big fat “0” left of missing aeroplanes (with occupants aboard) in your Country. I sure wish I could say the same about our Country!

No doubt there will be the odd change happen in this article until such time as MDX is located, and if there is any major changes, I will document them on a page at the end of this article, so please check back from time to time. I may even add a page or three as I have only really skimmed over much of this topic in an attempt to keep this article as simple and short as possible to not bore you! It’s hard to keep a balance.

If you have any questions or find I have anything wrong in this article, please email me. As I’m always saying - it’s not a matter of me being right or wrong - it’s a matter of finding the aircraft and occupants so that everyone can get on with their lives, and the families achieve closure.

If anyone can prove me wrong with cold hard facts, please feel free!

For any comments, corrections, etc, click on my name below (it's hyperlinked) to email me.